Are you searching for “Used Dodge Cars For Sale In Phoenix“? If so, In-Power Motors 3 has the best used car buying experience and selection of used Dodge cars in Phoenix, AZ.  Dodge cars have long been a favorite domestic option for American motorists. The company was founded in 1900 by two brothers named John and Horace Dodge. In the very beginning the Dodge brothers were a precision engine and chassis component manufacturer who supplied both Ford and Olds motor companies. Today Dodge is a part of the Fiat Chrysler Automobile family and features a wide range of passenger vehicles and the performance division SRT. We have a huge list of buy here pay here $500 down (O.A.C. – On Approved Credit) cars & trucks for sale!

Dodge has been a part of life for Americans for generations and quality used Dodge vehicles are plentiful. We are proud to offer these used vehicles to Phoenix residents. They offer a wide variety of options for fuel efficiency, configuration, and power.  To find out which used Dodge cars we currently have please call us at 602-680-7877 or stop by. 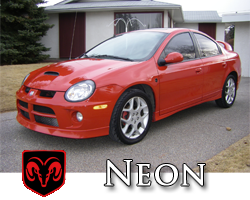 The Neon has been a staple for American homes since its introduction in 1994. It has been produced with both 2 and 4 door configurations and has been marketed all over the world in places like Mexico, Japan, Australia, Canada, Egypt and more. Early versions of the Neon featured two versions of the 2.0 L 4 cylinder engine that put out either 131 hp or 150 hp.

Second generations of the Neon were sold in 1999 through 2005 and were equipped with the 2.0 L engine with an optional Magnum or R/T version which produced 150 hp. The Neon was released during this time with a wide variety of packages which offered amenities like keyless entry, a larger 2.4 L motor, spoiler, and more. While the Neon isn’t currently sold new in the United States right now, it is planned to be reintroduced as a replacement for the Dart in 2018. 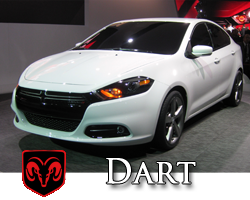 The Dodge Dart is another long standing nameplate that has roots deep into the past. Originally built during the 1960’s and 70’s the Dart was reintroduced with updated styling in 2012.  The newest Dart is a front wheel drive, transverse front-engine 4 door compact sedan.

The Dodge Dart is available with 3 transmissions, Bluetooth connectivity, obstacle detection, and even blind spot monitoring. The fuel efficiency of the Dart is an impressive combined driving rating of 40 miles per gallon. Safety features on the Dart are rich and include electronic stability control, traction control, ABS, brake-lock differential, brake assist, backup camera, hill-start control and much more. With a reactive head restraint system, 10 airbags, and other safety features the Dart help keeps drivers safe. In fact the Dart earned the Insurance Institute for Highway Safety 5 star safety rating in 2013. 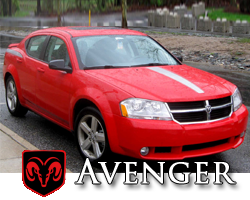 The Avenger is a mid-sized, front wheel drive sedan which was produced from 1994 until 2014. It has been made as a 2 and 4 door vehicle and with 9 different option packages car buyers had a wide variety of options to fit their budgets and preferences.

Coupe models were equipped with either the 2.0 L inline 4 motor or the 2.5 L V6.  Transmission options were either a 5-speed manual or 4-speed automatic transmission. The Avenger Sedan was introduced in 2007 and was released with with a 2.4 L inline naturally aspirated engine. Also available was the higher power 2.7 L V6 in the SXT trim level, and a 3.5 L V6 that was put in the R/T version of the Avenger.  Later models were even fitted with the new 3.6 L Pentastar V6 which produces an impressive 283 hp and is complimented with an upgraded suspension that improved ride quality and handling. 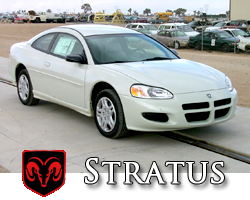 First introduced in 1995, the mid-sized Dodge Stratus earned top marks from Car and Driver magazine. The vehicle was also produced and marketed under the Chrysler brand as the Sebring. The vehicle was produced through 2006 and was replaced by the Dodge Avenger.

The Stratus was Dodge’s replacement for the Spirit and was situated as the middle entry between the sister cars Cirrus and Breeze. The vehicles were nearly identical with the exception of the rear bumper, wheels, taillights, and front fascia. Second generation Stratus which was produced from 2001 until 2006, were based on the Mitsubishi Eclipse platform, despite still having the same name. The available engines for the Stratus were the 2 versions of the 4 cylinder and a more powerful V6 engine. 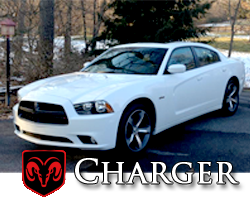 The Charger shares in American muscle car history and was started in 1964, the same time period as other icons of motoring.  The Charger as been built as 3 sized vehicles from subcompact hatchback, and full-sized sedans to personal luxury coupes. Today’s version is a horsepower rich 4 door sedan.

The Charger was reintroduced in 2005 with the sixth generation of the vehicle.  Styling was modern retro that was reminiscent of the 60’s and 70’s charger powerhouses. True to the name the sedan was fitted with either a V6 or a more powerful V8 motor. The basic entry model featured a 3.5 L V6 engine and 5 speed auto transmission, air conditioning, 17 inch wheels, traction control, stability control, ABS, power windows/locks/mirrors, and remote keyless entry.  More richly equipped optional packages added larger engines, like the 6.1 L V8 Hemi, heated seats, sunroof, 322-watt audio system, rear-seat DVD, GPS navigation, and much more. 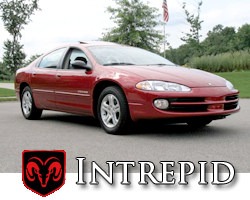 The Dodge Intrepid is a full-sized car that features front-wheel drive and is 4 doors. The vehicle was produced from 1993 to 2004 and is closely related to the Chrysler 300M and was the replacement for the Dodge Monaco.

Early versions ranging from 1993 to 1997 were available in two trim levels, the base version and the ES which added four-wheel disc brakes, “touring” suspension, and 16” wheels wrapped in better tires.  They also featured driver and front passenger airbags, four-speed auto transmission, and air conditioning. Later versions of the Intrepid were equipped with larger and more powerful V6 motors which produced anywhere from 200 to 250 horsepower. The Intrepid even was used for NASCAR racing until the Challenger took over in 2006. 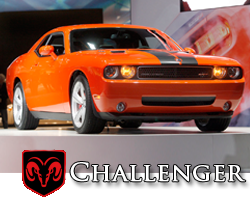 The Challenger is a 2 door notchback sedan which has its roots going all the way back to the 1960’s when it was Dodge’s answer the Camaro and the Mustang. During the 1970’s the R/T or “Road & Track” Challenger was introduce and featured the “Magnum” V8 which was a 6.28 L motor that produced 335 horsepower. Larger motors were also offered which produced up to 425 horsepower to compete with the Mach 1 mustangs and SS Camaros of the time.

The Challenger was reintroduced into the Dodge lineup in 2008 with heavy styling influences from the 1970 incarnations. The base model of the time was released with a 3.5 L V6 motor which produces 250 bhp. In 2009 the larger 5.7 L Hemi was fitted which makes a respectable 372 hp. In 2015 the Hellcat was introduced and features a supercharged 6.2 L HEMI engine which cranks out a staggering 707 hp and 650 foot pounds of torque. Clearly the Challenger is still a force to be reckoned with on the streets.

User Rating
4 based on 4 votes
Service Type
Used Dodge Car Sales
Provider Name
In Power Motors 3,
Area
Phoenix, Arizona
Description
Are you searching for "Used Dodge Cars For Sale In Phoenix"? If so, In-Power Motors 3 has the best used car buying experience and selection of used Dodge cars in Phoenix, AZ. Dodge cars have long been a favorite domestic option for American motorists.